The time has finally come! To round out her Ph.D. program, Charity is (finally!) about to start a doctoral internship (at least, that’s the plan between heart palpitations) and, rather than spending a year apart, Ryan is relocating the Pop Scavenger’s home base, right alongside her! That’s right, the colorful Fort Wayne logo you see is more than just a pretty (and purchasable from the city’s visitor’s center) magnet…

That’s right–with cats in tow, we’re leaving our Akron digs behind and heading for a year (maybe two) of Indiana livin’! Sure, we’re both a bucket full of nerves over all that’s left to be done–but after a three-day, whirlwind tour of our new city, our collective tachycardia started to level off a bit. Why? Because we can officially cross “find somewhere to live that isn’t made out of cardboard” off of our to-do list!

Our new apartment–adorably housed in an old home within one of the city’s many historic districts–is within walking distance of downtown Fort Wayne and all the good eats and culture it has to offer!

We may not have had the time for an official pop scavenger hunt on this trek, but we did do a little unofficial pop recon to help us both get the lay of the land and blow off a little apartment-hunting steam. So, between packing and indulging occasional panic attacks, we thought we’d take a moment to share the spoils of our most recent Indiana adventure with you, our faithful readers (READ: us and the one or two people we con into occasionally reading our posts. Not to worry, we have no delusions of a fan base. We represent about 95% of our readership…ever since our cats “unsubscribed”).

“Heeeeeere’s Johnny!” Appleseed. Yes, that Johnny Appleseed. Not only is the famed roving arborist buried in an unmarked, riverbank grave in the heart of the city, John Chapman’s more colloquial namesake (though I dare say, not his likeness) serves as the giant, bobble-headed mascot of Fort Wayne’s very own baseball team.

Parkview Field, home to the aptly-named Tin Caps, is an absolutely beautiful stadium and, at $10 a ticket, is a great place to take in a game and browse some pretty clever merch. For a single-A team, not only do the Tin Caps command a pretty decent crowd on a hot and muggy Monday night (in mid-May, no less)–to our delight, they also boast at least one Cap who hails from none-other-than THE Ohio State. And yes, we did give #3, catcher Jalen Washington, a good ol’ fashioned “O-H-I-O,” every time he stepped up to bat. –As an added bonus, a tweet commemorating our first game made it to the scoreboard! Check out the photo gallery below for pics of our first Tin Caps game! 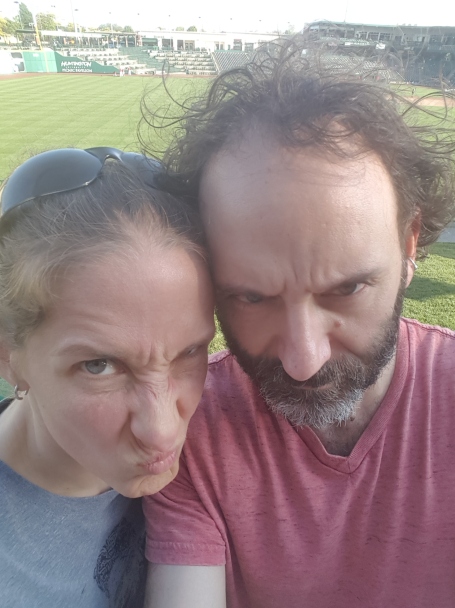 Gettin’ our game faces on… 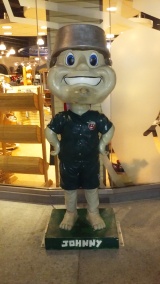 Johnny, in all his bobble-headed glory! 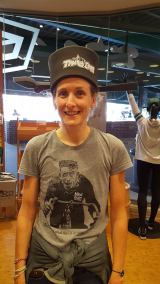 $10 buys you seats right behind the dugout!

When in Gnome, do as the Gnomans do… We also took a little time to enjoy some of the local flavor–and we’re so hoppy we did! Both a restaurant and on-site brewery, The Hoppy Gnome is as awesomely-branded as it is accommodating to just about every d

ietary need and desire you can imagine. Since Charity eats Paleo and Ryan enjoys exploring what’s on tap, it was the perfect place to settle into some outdoor seating, take in the sites of downtown, and stave off the hangry before the long drive back to our Ohio home. If the food doesn’t sell you on this place (and it will…just say yes when they offer chips and salsa, you’ll be hooked), then their clever beer names will. Don’t believe us? Check out their drink menu…you’ll be glad you did.

We have just over a month before we ship outta Akron, but rest assured we’ve already got a few pop scavenges in the works before we put the Rubber City in our rearview…